The Cameroon chapter of the Women’s International League for Peace and Freedom (WILPF Cameroon) was established as a group on 31 January 2014, under the guidance and technical support of the sister chapter in the DRC, and with financial support from the Swedish chapter.

In April 2015 at the WILPF Centenary Congress in The Hague, after only one year of existence, WILPF Cameroon became a full-fledged section of the oldest women peace organization in the world. The story of WILPF CAMEROON actually started in 2012 in Istanbul-Turkey during the AWID forum where President Sylvie Jacqueline Ndongmo came in contact with the organization by visiting their stand and taking part in workshops organized by WILPF at this important meeting.

She was very impressed with the work WILPF is doing around the world to promote peace, and especially with the data provided on militarism, peacekeeping operations, military spending of countries disproportionate to the efforts made in the promotion of human rights and in particular women’s rights, to name just a few. She was able to clearly make the link between women’s rights and the proliferation of arms, and was very surprised to see how countries vote. 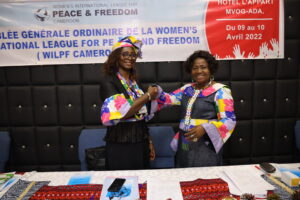